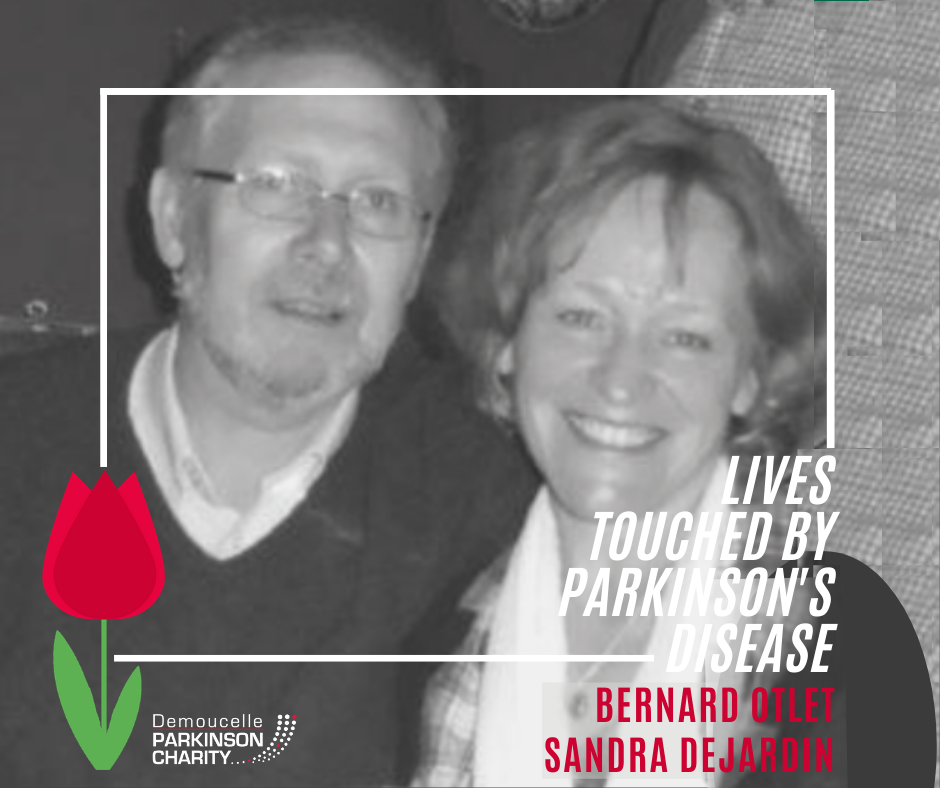 Can you tell us a bit more about yourselves?

Bernard: We have three daughters. We like spending time together and being at home. So, the confinement (because of Covid-19) has perhaps affected us less than others.  I like to cook.

Sandra: Yes, Bernard is the one who cooks all the family meals, and while it’s true that we like to be at home and watch good films, we also like to travel. Bernard is very interested in Romanesque architecture and we like to go to Italy and France to see churches. We also enjoy going to the theatre and concerts. Although all this is more difficult nowadays because of Parkinson’s disease and coronavirus, of course!

What were the early symptoms of the disease that led you to visit a doctor?

Bernard: The first symptoms I noticed was difficulty walking, as my left foot dragged a bit. I also had difficulty putting my hands together and my posture changed.  My handwriting, which had always been very good, became smaller and more and more difficult to read. 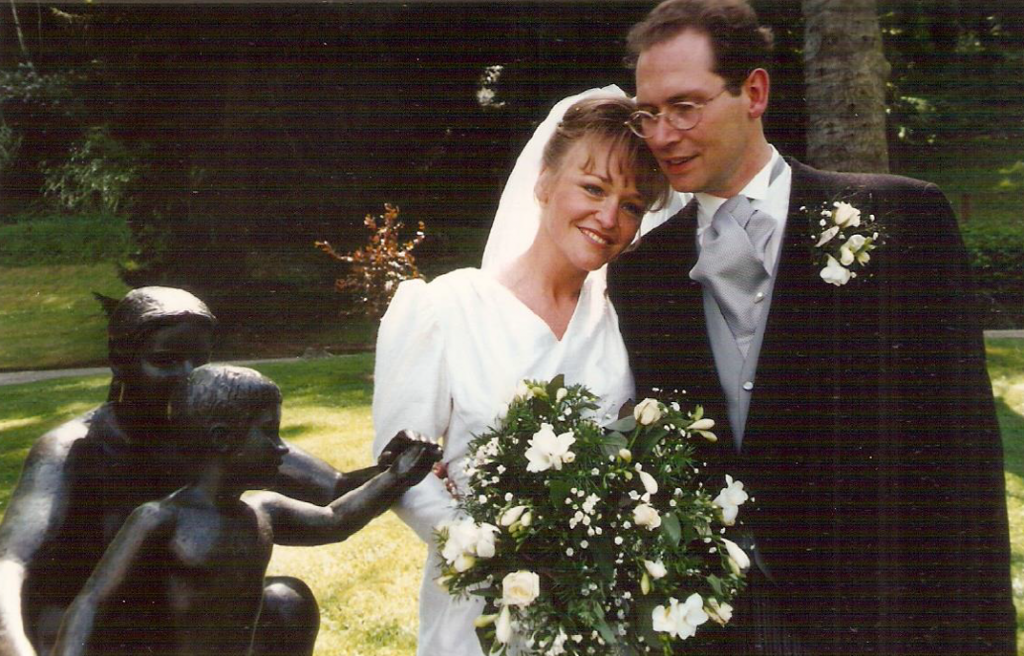 When and how were you told you had Parkinson’s?

Bernard: I went to my GP because I was off balance on my left side and my neck was stiff. I was alone. He told me it might be Parkinson’s disease.  I wasn’t expecting it at all. It was a total surprise.

Sandra: Yes, he had gone alone. I was out shopping for Saint Nicolas. He hadn’t called to tell me what had happened, which wasn’t like him and that worried me. When I finally called him to find out, he told me that it was probably Parkinson’s disease. I was really stunned. But it just so happened that by a strange coincidence I ran into an acquaintance whose husband had also been diagnosed and who immediately gave me the contact details of a good neurologist.

What was your intial reaction? What did you fear most? How did you come to terms with the news (if you have)?

Bernard: I didn’t really know anything about the disease and so I didn’t know what to expect. The only image I had was that of someone who shakes a lot. But I don’t have a tremor. I have episodes of stiffness, of rigidity. That’s the other form (of Parkinson’s Disease).

Sandra: My first concern was whether it was fatal or not.  Was he going to die prematurely? Thanks to Dr. Jeanjean’s website, I was quickly reassured. In terms of everything else, I didn’t really know what to expect.

How did family and friends react?

Sandra: As we had no experience of the disease, the girls (who at the time were 16, 18 and 20 years old) didn’t really know how to react. They just took the news and carried on normally with their lives. It was only over time, and as the disease progressed, that they really had to adapt.  And let’s be honest – I think it’s important to be honest – it hasn’t been smooth sailing.  We would get annoyed when Bernard was too slow, got in our way etc. You can’t blame anyone for that, but it’s important not to feel guilty. Now that they are older, and they know how to drive, they can help more with shopping, cooking. But it’s difficult. For everyone.

Bernard: Yes. I had difficult moments when I would take myself away to hide how upset I was. Our eldest daughter gave me a “gift” by directing her civil engineering studies towards biomedical engineering. She is preparing a thesis on an exoskeleton to help Parkinson patients to walk. 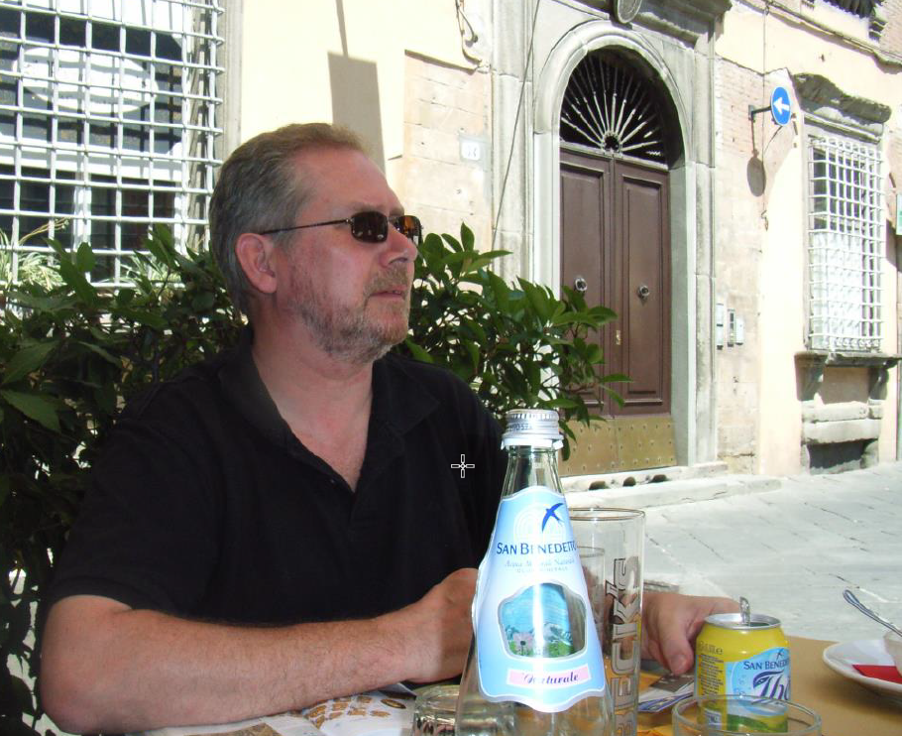 What is one of the main symptoms of Parkinson’s Disease and how does it affect your life?

Bernard: Uncertainty. I don’t know when I’m going to get stuck, when a period of remission will occur or how long a severe episode will last. It makes it difficult to get out, to be independent. I no longer drive a car. I could probably do it, but I don’t think it’s safe if I don’t know when I might suddenly not be able to move.

Sandra: Yes, we all have to do more now because Bernard can’t do as much as he used to. So, I do the shopping and the paperwork, like taxes, transfers, health insurance forms etc. I take him to the doctor and the physiotherapist etc. Travelling is also more difficult. Going to the theatre. Going to a concert. You look at everything with different eyes: the height of the pavement; the access to the public restrooms to be able to administer an injection. We had a terrible experience on holiday in Croatia when Bernard fell two metres.  It was horrible. The medical staff there weren’t familiar with Parkinson’s disease. They didn’t know how to manage Bernard and his medication.

How do you explain Parkinson’s Disease to others?

What has helped you to relieve the symptoms of Parkinson’s Disease?

Bernard: We were lucky enough to find a good neurologist very quickly. The neurologist also introduced us quite quickly to alternative techniques/treatments.

Sandra: I would also add sophrology helped Bernard. It is a technique of active meditation, breathing and relaxation.

Bernard: I had Deep Brain Stimulation (Deep Stimulation) surgery in July. It took a long time to find the courage to do it because it is on the brain but I am glad I did it. I managed to cut my medication in half. I walk better. I have better posture. I have fewer ‘off’ periods and the ones that do occur are less extreme.

What is the biggest challenge/difficulty of having Parkinson’s Disease?

Bernard: Not being able to plan. Having to live from moment to moment. Always worrying.

Sandra: Indeed, worrying and thinking about the disease can almost become an obsession. Everything revolves around the disease. It can be difficult to live in the moment without it imposing itself.

What do you miss most now that you have Parkinson’s disease? And why?

Bernard: Travelling. Having a life outside the home. Visiting friends. Writing. 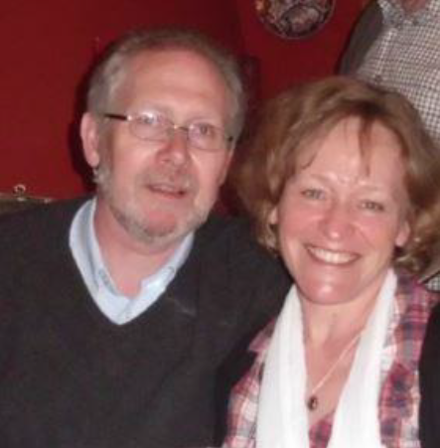 In what way does Parkinson’s Disease amplify or change one of your character traits?

Bernard: I’ve always been very anxious, which has intensified with the illness.

How do you see your future? What keeps you going?

Bernard: The fact that research is being done (to find treatments and a cure), and that things keep moving forward, gives me hope. There is a possibility that things will improve.

What would you like other people to understand more about Parkinson’s Disease? And why?

Bernard: Actually, I am struck by the number of people who know about Parkinson’s Disease because someone close to them suffers from it.  I think I would just like to encourage people to try to be empathetic and understanding.  If you meet someone who is experiencing an ‘off’ period, be calm and patient.

Is there anything positive that has come from having Parkinson’s Disease?

Bernard: (after a long pause) No, I can’t think of anything positive.

Sandra: I would say he is taking better care of himself now. He walks more. He is more closely followed by doctors.  Though it’s true that it was a pretty brutal way to make this happen.

What advice would you give to someone that has just been diagnosed with Parkinson’s Disease?

Sandra: Find a good neurologist. Accept the disability status (which can be difficult psychologically). Create a good support team around you including paramedical professionals such as a physiotherapist. Maybe also find a psychologist. And talk to other people who are going through the same thing as you, whether it is the patient or the spouse.

What motto do you try to live by?

Bernard: “Don’t let the illness get you down. Stay hopeful that things will get better”. 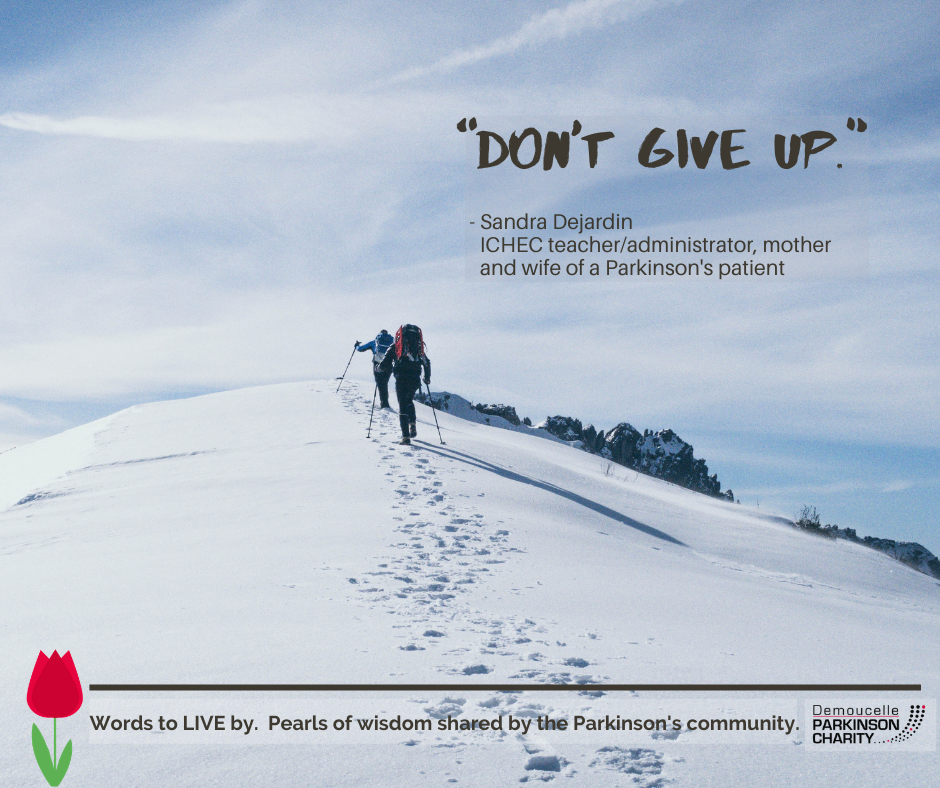