Can you tell us more about your mother and your relationship?
I am the youngest of three siblings. My sister is eight years older and my brother is six years older. So I was kind of a “lucky mistake”. My parents own a farm so they were always at home, which was great! Because my siblings were much older and already had their own activities my mother did a lot of fun stuff with me like going to musicals, going on little trips or just baking a cake. We had a good relationship. She was very positive and fun. Over the years, as her disease got worse, the roles were reversed.      (Kristien with her mother, Diane Theys)

How did your mother react initially to Parkinson’s Disease and how has this changed over time?
The first few years she fell into a depression. The depression has lessened but she is still very down and disheartened at the thought that it will never get better.

When and how were you told you that she had Parkinson’s disease?
I remember that my mother came to pick me up at primary school and that she felt dizzy and saw black spots, so she had to sit down. After this she went to the hospital and got the diagnosis.

What was your initial reaction? And, how did you come to terms with the news (if you have)?
I don’t really remember. I do recall telling my fellow students in front of the class what had happened. I wasn’t an open book so am grateful that my teacher helped me to talk about it. I still have a lot of friends from that group who support me even now. 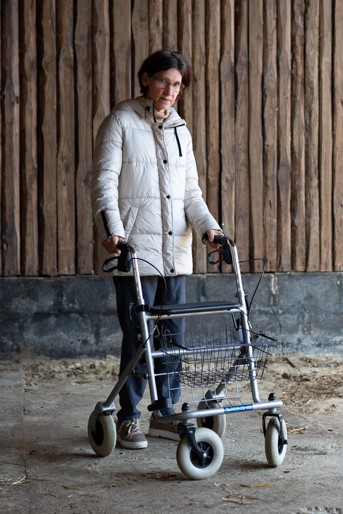 What is a PD symptom you discovered that you didn’t know about before? How would you explain it to people who don’t know PD?
Of course, at the age of 12, I had never heard of the disease before.  I see Parkinson’s now as a disease with many layers. Because my mother was so young when she first got it I have seen all of the stages (of her personal journey) from close up.

What is most difficult with my mother is that what you see is often the opposite of what is going on. Even for her this is still difficult to understand and explain.

For example: She is very sensitive to the medication and experiences a lot of side-effects which translate into chorea (excessive movement).  So what people see when the meds are working is that she walks strangely, has difficulty staying seated and has less balance. People encourage her to sit down or take a rest. But infact at this moment, she actually feels better.

But when she has an ‘off’ moment she can’t move at all or every movement feels heavy and her muscles just don’t work. What people see then, when the meds aren’t working is that she is sitting calmly on the sofa and seems to be ok. What she actually feels is a body that won’t move and feels constantly restless.

As a result, people think that the excessive movement is Parkinson’s but actually Parkinson’s is when she can’t move.

What have you observed as being the most difficult aspect for your mother of living with PD?
The fact that no-one understands what it feels like. She tries to explain but it is so complex.
And the fact that it will never get better.

What was the impact of her diagnosis on your life?
Since I was 12 the role of mother-daughter has gradually shifted and the roles have been reversed. It started with the household, just helping around more. But at a certain point it got too difficult for me. When my mother was at her worst (I think I was 22 at the time) she didn’t have Parkinson’s anymore, she became Parkinson’s. It really consumed her. Everything she said or did was related to the disease. The most frustrating thing is that you can’t help her and she was always asking for help. I would get angry just out of frustration of not being able to help her. So at that time I really felt angry all the time. This has changed since I live on my own. 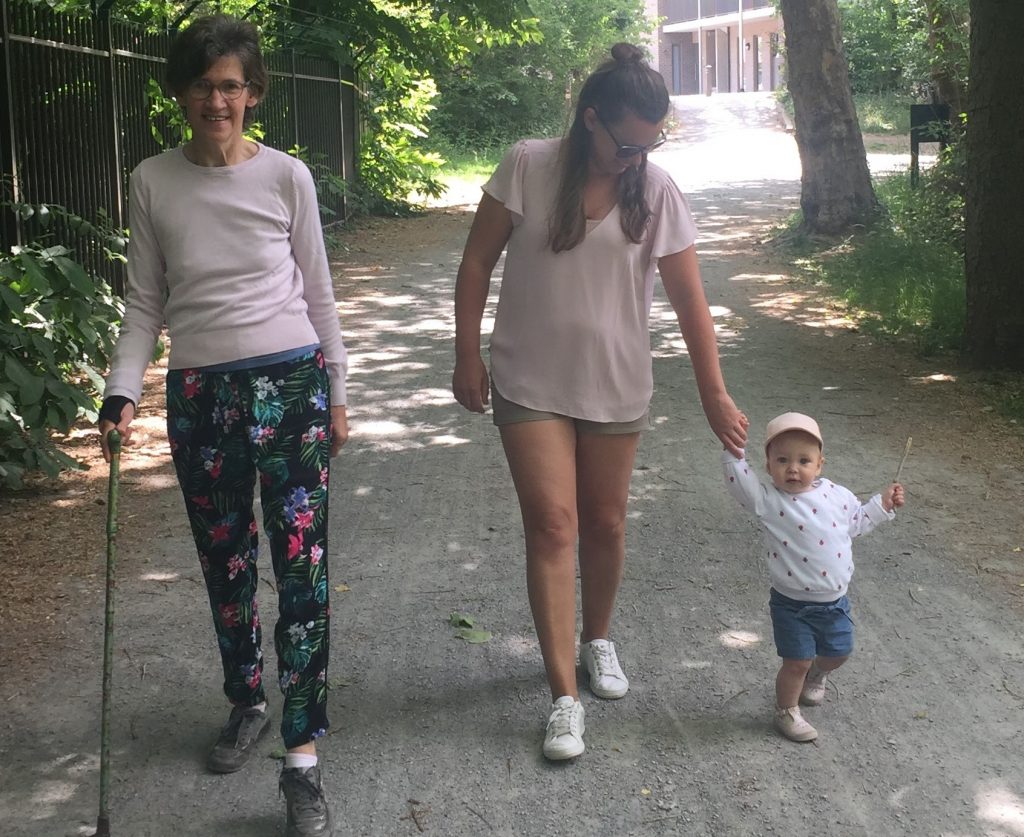 What do you miss most now that your mother has PD?
It saddens me that she has to miss out on a lot. Being able to play with her grandchild or driving a car are things she can’t do.  I miss just being able to go there and pick her up to go on a “normal” trip or just to do random normal stuff without both of us getting stressed or having to be home on time for her meds or something else.

How has/was your relationship with your mother changed since her diagnosis?
My relationship with my mother has of course changed because she has had the disease for so much of my life. I think she trusts me a lot and I feel I understand her better than others. We aren’t the cuddly family type, but this connection means that we have a strong bond.

How do you try to ‘be there’ for your mother? Where do you get the energy to do so? How could others support you?
Since I moved out of my parent’s home I try to visit often and to keep her company. I also try to get things that will help her in daily life or I run errands and do the grocery shopping. Other people support me by just asking how she is. And they can support her by just visiting her occasionally. 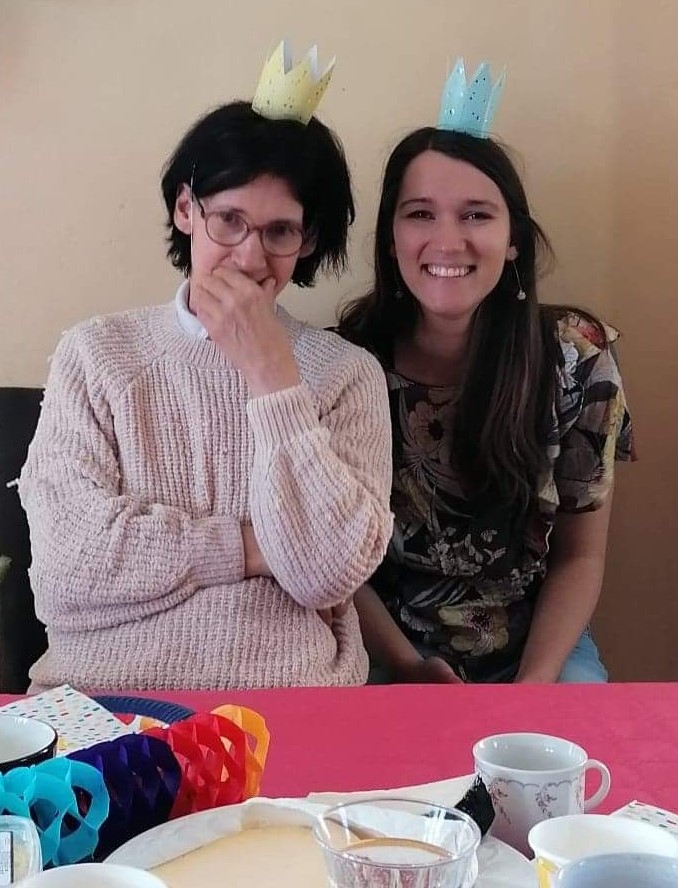 What, if anything, is something positive that PD has taught you?
Health is everything. In my life I try not to postpone things that I want to do. I try to enjoy every moment. That’s a great gift my mother has given me. She used to say: later I want to travel more etc. But it’s not possible for her anymore. So, I have already done a lot of fun and nice things and I pursued my dream job:  being a professional singer, instead of getting a ‘decent, steady’ job. And I succeeded.  Nina Simone sings: Love my tonight, tomorrow was made for some. Tomorrow may never come, for all we know.

What do you wish other people would better understand about PD?
Body and mind work together. When my mother is happy, her body follows. A quick visit or a small talk will distract the patient. Every little moment helps. So don’t hesitate to pay a visit or call. Doing so also gives a few moments of relief to the people living with the patient.

What does the future hold for you and your mother?
My biggest fear now is that my mother’s balance has become very bad. She falls almost every day. This year she has had a broken wrist and a concussion. In order to avoid her going to live in a care home, we have to renovate the house. Looking ahead, I worry that she will get Alzheimer’s, which is common for PD patients. Thankfully, she is still quite alert at the moment.

What advice would you give to somebody who has just learned that a friend or family member has PD?
Try to listen without giving advice. Let them vent. Help in small ways and don’t stay away. It can be very tiring and confronting to go and hear and see all the problems of the patient when you already have your own life to deal with.

Don’t feel guilty. You can’t help and it’s frustrating. But it is not your fault.

What motto do you try to live by?
Carpe Diem! Do it NOW!