What happens when 2 members of a Leadership Team don’t get along? Two ExCo members continually having opposite views or positions. Two functional heads that think of each other as incompetent. Two n-3 constantly quarelling because they ambition the same and unique n-2 job.

Yet a lot is happening, invisibly but building up. When 2 members of a leadership team don’t like, trust, value or accept each other, it doesn’t go away but grows persistently, and it brings a huge cost:

Not exactly the best conditions to create top results with your company or your team… So what to do about this situation?
It’s time to acknowledge that an integral part of leadership is alignment of conflicting positions or behaviours within the team you lead.

The following picture shows the various levels of alignment in a team. We have found it a very useful framework to help understand the minimum required in terms of team behaviour. 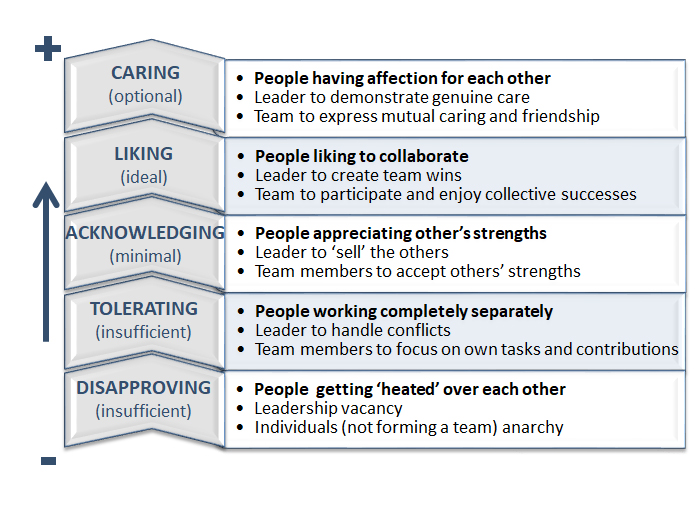 0. Name the drama and empower them

Having the framework above in mind, the first thing you should do, is to name the drama: the protagonists are often unaware of their behaviour, and surely unaware of the cost and consequences. So put it on the table, and tell them like it is.

Then, there is the option to let the two team members sort it out themselves. Be warned, it doesn’t always work; but it’s worth a try – after all, they are adults. So give them that chance.

If (or when) empowerment doesn’t work, your second option is to intervene yourself. Here are a few guidelines:

Our recommendation would be to aim at least for the “acknowledging” stage; which is the minimal stage we have found effective in the framework above.

In this stage, challenging each other is not only accepted – it’s a MUST.
But the challenging happens in a spirit of ‘trust’.
And that’s where the leader has a fundamental role to play.

2. Help create trust on willingness and on style

Show commonality of goal: “you both want the same”. (eg both of you want to enhance customer experience – you might not agree on the ‘how to’ – but at least you want the same…)

Indeed, when people realize the other party has the same intent and the same interest in mind, tension diminishes and trust increases. When there is a ‘commonality’ between both parties, sympathy for each other increases (people like people like them…). By showing commonality of goal, you develop the basis for enhanced ‘teamness’…

Show complementarity of approach: “we need both your expertise”. (eg let’s leverage both the “creativity talent” of one party and the “organisation talent” of the other).

When the leader states both parties are strong (with clearly stated complementarity), a strong signal of mutual trustworthiness is spread. As each party now feels acknowledged, they become less defensive – thus opening up more to ‘novel ideas’. The increased ‘trust’ and ‘openness’ leads to more collaboration and creative problem solving – which then encourages even more collaboration.

Most times, consistently applying these 3 tips will have tremendous impact. Go and use them – and notice the difference!

Reality is that some situations are less straightforward. If your intervention doesn’t solve the issue (by lack of time, collaboration or other), you have 2 tools of ‘last resort’: