Highly successful people tend to have a strong mindset. They have deep inner convictions that truly empower them. Einstein, for example, considered “I’m not smarter than others, I just spend more time on problems”. Michael Jordan, the greatest basketball player of all times, stated over and over again “I failed a thousand times, that’s why I succeeded”. Eleanor Roosevelt argued “nobody can make me feel inferior without my consent”.

The question one might ask is: what if you don’t have those strong convictions? What if lack of success means to you you’d better give up? What if failure means to you you’re not good enough? What if others’ opinions (especially the unfavorable ones) are immediately considered to be the one and only truth? How can one develop more empowering beliefs? The answer is simple: the same way you have developed your current beliefs: others, logic and experience.

How we developed our current beliefs

Our current beliefs are the result of 3 origins:

How can we adopt new beliefs

In fact, we still adopt new beliefs. Every day. The way we do it, is exactly the same way we developed our previous beliefs: others, logic, experience.

An example in the news: breaking 2

As you might have read in the news, Nike has announced an incredible challenge: breaking 2. On May 6th or 7th 2017, Eliud Kipchoge (the current Olympic marathon champion), together with two other top runners, will try to run the marathon in less than 2 hours. If he succeeds, it would be an INCREDIBLE feat. One people will talk about for years to come. Indeed, the current world record is almost 3 minutes above 2 hours: 2:02:57. And world records tend to improve only a couple of seconds per year. Statistical regression analyses of the world records over the last decades expect a ‘marathon below 2 hours’ in 30 years, not in the next month!
How did Eliud adopt the belief it could be done in the next month? These are our assumptions:

What’s fun, is to see how the press is progressively changing its conviction about the upcoming feat. When Nike first came, a couple of months ago, with the news athletes who would run the marathon in less than 2 hours – not in 30 years but in 2017 – the news was met with ample disbelief. However, recently, articles have turned more and more towards the message ‘would it be possible?’. A serious change of belief on the side of the journalists there…

How did this happen? Again – the 3 same factors:

How you can develop new (empowering) beliefs

It doesn’t matter to us whether Nike and Eliud Kipchoge will be breaking 2 or not. What matters most is how they developed the conviction it would be possible. 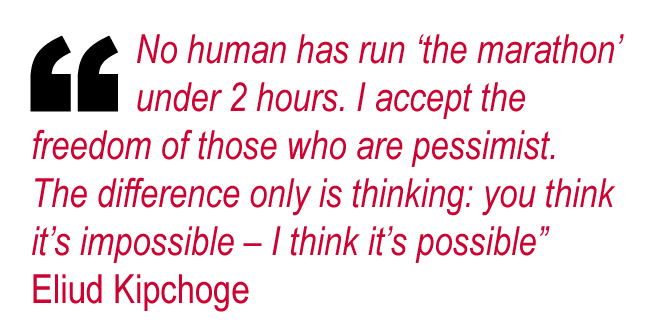 Don’t hesitate to contact us if you want guidance in identifying the ‘empowering beliefs’ you or your team are ‘missing’ in order to get to full potential.