Here’s another video in our series of ‘creating positivity and engagement in your teams’. Today we’ll talk about the power of co-creation. 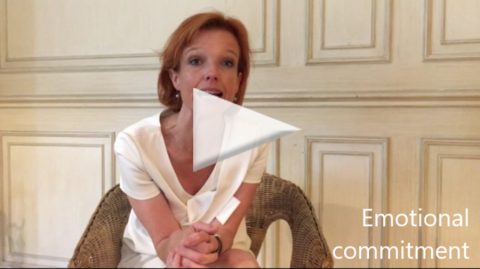 Kevin Cruise wrote ‘employee engagement is about the emotional commitment an employee has for its organization and its goals’. And that’s where it often goes wrong.

Has it ever happened to you: you’ve been working for months on crafting a vision, developing a strategy, outlining a project. You’ve had a couple of Steering Committees. Everything seemed to go well. There were not a lot of reactions but things were moving forward. And then suddenly people in your Steering Committee start putting things into question: they come back on previous decisions, nothing is certain anymore, … You are confused: what just happened?

Chances are high that those people from the Steering Committee, or from the team that has to implement it, were not really involved in crafting it all, in constructing, building it. And that’s why they are emotionally completely detached from it. They don’t live by it because it’s not their own thing.

Our suggestion would be: if you have something really important to make, something important that you are working on, do it in co-creation. Really involve people in crafting it.

Because not only will it help in terms of quality – you get different perspectives – everybody can tell you  “Have you thought about this and that?”. So that’s one thing. In terms of quality it’s going to be better.

It will also be better in terms of commitment and engagement. Because once people have co-created something, they feel owner of it, it is their thing, they feel committed to it and they want to implement it. And when the things get tough, it’s ok, they will continue because they believe in it, they co-created it.

But also in terms of positiveness: when can people help co-create something, there is that sense of realisation, “Wow, look at this thing we all co-created together!”. And there is the sense of purpose: “I’m contributing to crafting that vision, to developing that strategy, to outlining that big thing“.

So if you want to have the quality, and the engagement, and the positiveness, for important things, go for co-creation! Good luck!