We often have executives share how difficult it is to get others to act as wished for.

Take Nick, senior manager in a services firm. When we met, he complained about his team. “I cannot rely on them! The reports they produce are below par! I have to correct and redo so much of their work. This is unsustainable! I’m seriously considering resigning… Who wants to work in a company with only ‘left hands’?”

Or take Andrea, executive in a large Belgian company. She complained that colleagues, asking for advice or guidance, continuously interrupted her. “At the end of the day, I have the feeling I’ve been busy all the time, yet made no progress at all! So frustrating! This new flex desk policy in our company is a true disaster… I have no time anymore to concentrate on my own work…”

Two quick questions. Would people stop interrupting Andrea if they continued receiving good answers from her? Would team members do things differently than before if they know Nick would want to change the report anyway? Of course they wouldn’t! That’s why they continued the ‘undesired behavior’. After all – they got away with it!!!

Usually it helps to provide clear expectations and to be consistent. Though this might sound ‘simplistic’ and ‘insufficient’, it tends to be very effective. When colleagues know what’s expected from them, and they realize they won’t get away with not doing it, they usually end up doing the right thing…

Andrea had too many n-2 come to her, rather than to their manager. Probably because, given her experience, she gave quicker (and better) answers. Andrea realized many of the questions could be answered by the manager. She decided to tell people to first address their questions with their own manager. Only if the manager deemed it necessary, the question would be escalated to Andrea. Andrea would be consistent. Whenever she received a question from an n-2 or n-3, she would ask “Have you checked it with your manager? If not – why don’t you check it with him first“…

For Nick it was quite similar. He had hundreds of quality concerns with the reports he received. So it was impossible to give clear expectations for everything. But he realized some quality issues were far more frequent than others. So Nick decided to already clarify his expectations on these… And be consistent. Every time these 2-3 areas were not ok, Nick would say “Oh – you see – we agreed reports had to include x or y – I see it’s not yet done. Could you adapt the report? I’ll look again once it’s done”. Consistently.

Andrea and Nick thought it would be easy to apply this ‘consequence management’. But it wasn’t…

Having to correct the reports of his team members had always been exasperating for Nick. But it had given some good vibes as well. “How good I improved this report”. “It’s much higher quality now”.  “They sure need a reliable person like me in this position!”. No wonder expressing clear expectations didn’t come easy for Nick…. OF COURSE he continued to change the reports himself “it’s so much quicker if I correct it myself than if I have to ask my team member to correct it! After all, I am an efficient, productive person!”.

Being interrupted had always been frustrating for Andrea. But it had been rewarding too. Be able to help others, see their smiles, connect with them, feel proud of knowing the right answers, … These had all been small ‘victory moments’. Besides, who would feel comfortable with saying: “I don’t want to help you”?  Andrea was a nice, reliable person – not? So OF COURSE she continued to allow others to interrupt her, even after she had expressed clear expectations.

For the situation to improve, Andrea and Nick had to be sufficiently motivated first. Motivated to change the status quo. Motivated to stop having those ‘small personal wins’. Motivated to accept the discomfort of not stepping in anymore. When they were truly motivated, and really DECIDED to change, they started to act. And to reap the results. Leading to more effectiveness for Andrea and Nick. But also more fulfillment for their colleagues (who now had more clarity and empowerment)…

Are there areas in your professional (or personal) life where others are not doing what you want? Why not clarify expectations and be consistent in correcting people until they apply the ‘right behavior’? But make sure to be sufficiently motivated to address the issue. Without this motivation, it won’t work. Promised. 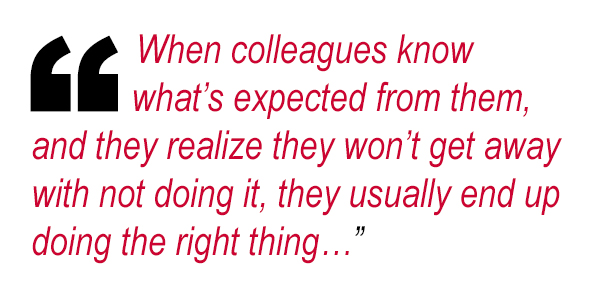 Don’t hesitate to contact us if you want guidance in consequence management. Good luck!